Proposals are invited for issue 44 of the Engage Journal, Engage 44: Biennials and Beyond. This issue will focus on biennials relationships to gallery education and engagement programmes. Deadline for proposals: Friday 13 December 2019, 10:00 am 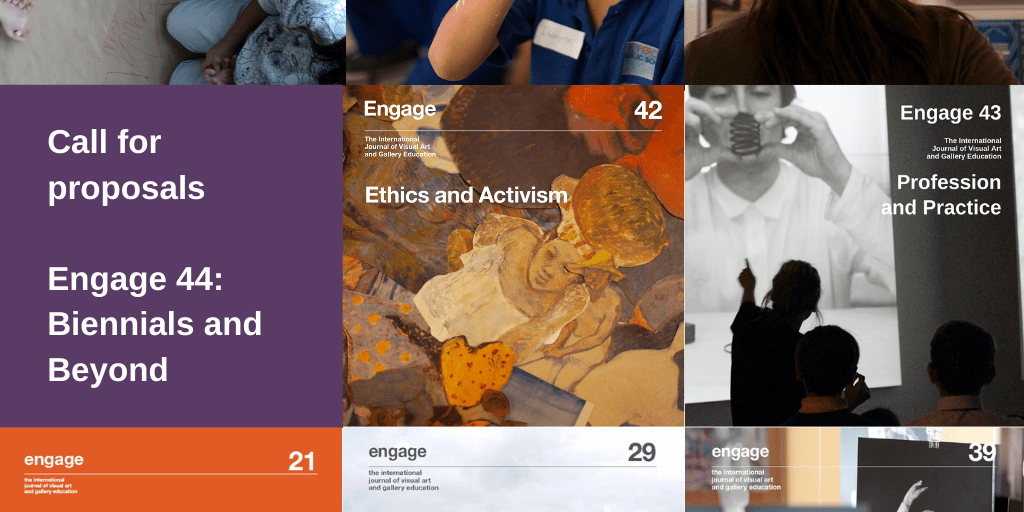 The outline
below, stimulated by a discussion with the Engage Journal Editorial Advisory
Board (EAB), is followed by a series of questions. Please address these or use
them as prompts in proposals for articles.

Biennials
have been part of the ecology of the art world for many years, with the
biennial (or biennale as per the original Italian) becoming a shorthand for a
recurring event that occurs in a specific place. The majority follow the lead
established by most famous, the Venice Biennale, which since 1895 has set a
precedent, not just of frequency, but of national participation and awards. And
more importantly perhaps, it established a concept for regeneration, designed
to reboot Venice as a tourist destination and to utilise an area of the city
that needed repurposing.

Post-WWII,
Germany launched possibly the most anticipated event in the international art
calendar, Documenta (1955–), returning now every five years to Kassel, in the
centre of what was then West Germany. In Engage 20: Strategic interpretation,
Carmen Moersch describes how the role of education began to change during
Carolyn Christov-Bakargiev’s 2012 edition.
The most recent Documenta (2017) developed extensive and intensive
education programmes across Kassel and Athens (where it was partly held), led
by their Head of Education Sepake Angiama (now about to take on the role of
Director of INIVA after being at the Chicago Architecture Biennial). Some of
this experience is captured in her publication Aneducation: Documenta 14, a
sophisticated attempt to include a cross section of the contributors, described
as:

“This is not
a book of good intentions. It attempts to introduce a chorus of voices that
speak from different positions on aneducation, the education program for
Learning from documenta 14 in Athens and Kassel.”

Several
biennials from the 1980s onwards began to think about whose voices were
included, and to contest the promotion of (Western) nationhood, modelling new
forms of curatorial strategies and privileging artists from less well established
art centres. The Havana Biennial (1984) is often remarked on as this changing
point and Okwui Enwezor’s 2002 Documenta heralded as the first major
post-colonial biennial and the first with an artistic director not from Europe.
Enwezor will also be the first to posthumously curate a major Biennial, with
his initial notes to be used for Sharjah Biennial 2021, ‘Thinking Historically
in the Present’. The Biennial Foundation currently lists 260 in its global
directory, although there are many more in smaller towns and regions across the
world.  Europe’s nomadic biennial,
Manifesta, even asked the question of its first Advisory Board: “biennials
don’t work, so why start another?”

The UK has
grown several well-established biennials including the Brighton Photo Biennial
(2003–), Artes Mundi in Cardiff (2002֪–), Glasgow International (2005–), and
the Liverpool Biennial (1999–). Until recently, the Liverpool Biennial was led
by Sally Tallant — previously Head of Programmes at Serpentine and now Director
of Queens Museum, New York — whose methodology underpinned the Biennial with
research and education. These and other internationally focused biennales have
brought a much needed diversity and debate to the UK context. With Brexit
looming and anxiety around funding increasing, are we looking at fewer
opportunities for international collaboration and dialogue — and therefore
education — for the UK? In the autumn of 2020, the quinquennial exhibition
called the British Art Show returns to tour UK cities, Manchester,
Wolverhampton, Aberdeen and Plymouth, how will it deal now with the
geographical definition implied of its title? New biennials include Coventry
(2017–) established and ran by artists to lead up to Coventry City of Culture
in 2021. Biennial culture seems to largely favour a city, or a seaside town
(Whitstable Biennale (2002–), Folkstone Triennial (2008–)), so where does this
leave rural areas? What are the successful models or equivalents that create
impact and engagement with visual art across rural areas?

More
recently there has appeared a trend for a regular biennial type event by issue
or artform, including the British Ceramics (2009–) and Textile (2019–)
Biennials, Asia Triennial Manchester (2008–), Yorkshire Sculpture International
(2019–) and a forthcoming performance triennial in Scotland for 2020. The once
every two years structure is also pervading more contemporary and cross-art
form festival arrangements (for example Manchester International Festival),
with the notion of spectacular event culture underpinning the
once-every-four-years capital of culture bids across the UK. UK capital of
culture was set up after the success of Liverpool becoming the European City of
Culture, but what is the real legacy of these and other major initiatives such
as the Cultural Olympiad of 2012?

Education
and engagement programmes vary widely across biennials but are an important
feature in most locations, with larger biennials including teams designed in
the style of gallery-based activity including formal and informal fields,
artist development, public debate and digital engagement. Some collaborate
effectively with existing engagement offers or offer incentives for ‘local’
artists, in some part presumably to ensure their buy-in, and some offer
curatorial roles specifically for education. Despite these moves, the
infrequency of the ‘main event’ must present some significant challenges to
creating sustainable and meaningful education programmes around biennials
outside of institutions. The Critical Practices group at the Winchester School
of Art, as initiated by Professor Robert E. D’Souza, have been working closely
with the Kochi-Muziris Biennial (2012–) since its inception to study the
‘biennale effect’ and evaluate considerations of geography, local impact, politics,
economics and more.

Biennials
have a reputation for contradiction and controversy. They frequently attempt to
address the burning issues of the day, hoping to break new waves or at least
hit the zeitgeist, for example around issues of representation and issues of
de-colonising the art world. This year’s Whitney Biennial saw artwork by UK
based collective Forensic Architecture addressing, and protests concerning, the
‘tear gas’ company owner and museum’s vice chair Warren Kanders that led to his
resignation. The biennial is a respected place for making the careers of
artists and yet only this year did the Venice Biennial reach gender parity for
men and women. They often represent an opportunity to experience a tremendous
amount of new artwork for locals and visitors alike, and for professionals to
share practice internationally. Of course, all of this requires travel. The
1990s saw a proliferation in cheap airlines which also aligned with the
increase and spread of biennials across the globe, and this was also a time
when UK arts communities became increasingly international in their focus and
projects.

Climate
change has become a concern for both the production and content of these
events. This year Nicolas Bourriaud took on the environmental issues for The
Seventh Continent (Istanbul Biennial 2019), a reference to the amount of waste
floating in the ocean, whilst simultaneously claiming that ‘art world travel is
just a drop in the ocean’ (The Art Newspaper, 12 Sept 2019),  instead accusing mass tourism and large
corporations of causing the problem. Jérôme Bel, an internationally renowned
choreographer who is also a regular of visual art biennials, quit flying
completely in February of this year on the realisation he was contributing to
ecological damage (The New York Times, 23 Sep 2019).  He has since been working via Skype to make
performances happen in North America. If Jérôme’s example is replicated
elsewhere, how will environmentally conscious policy begin to impact upon
artistic and educational programmes of visual arts organisations and galleries?
What are the environmentally friendly strategies and viable alternatives to
travelling for biennials and events that also keep open vital cross-cultural
dialogue?

Whilst
biennials of the art world try hard to defy categorisation through their sheer
diversity and breadth of scale, they are also united by often common reasons
for existence and in their exploration of the new and for commissioning
contemporary art. There is an urgent need to debate and evaluate further the
role of education in these biennials and indeed consider their impact, value
and legacy across a range of artistic, environmental and socio-political
factors.

We are
interested in contributions from colleagues in the UK and worldwide that
concern the topic of biennials and other art events and specifically where this
connects to gallery and visual art education. Proposals should address
questions such as:

If you are interested
in contributing to this issue, please send an informal proposal of no more than
300 words, your job/freelance title and contact details to
communications@engage.org by Friday 13 December 2019, 10:00 am

Contributions
may take the format of articles, interviews, collaborative pieces,
conversations, photo essays or discussions, and engage welcomes those which
take advantage of the Journal’s online format, through the use of sound or
video clips, film and html links to digital content. As a guide, final articles
lie between 1,500 and 3,000 words.

About the
Engage Journal

First
published in 1996, the Engage Journal is the international journal of visual
art and gallery education. Now a twice-yearly online publication, the contents
of each edition follow themes linked to the visual arts and education, chosen
through an open-submission process. The Journal acts as a snapshot of current
thinking on a subject, a repository of references, a source of practical ideas,
and a forum for exchange between different parts of the art and museum and
gallery community.

The Journal
is edited by Sarah Perks, curator, consultant and writer. The Journal is
governed by a voluntary Editorial Advisory Board. The Engage Journal is
accessible to Engage members and subscribers to the publication. To learn more
please visit https://engage.org/journals/.

To purchase a single issue
or to subscribe
to the Engage Journal, see the Engage website or email info@engage.org for further information.